The Canadians are coming!

In January, this year’s Canadian Strathcona Cup Team arrive in Scotland to play for the Strathcona Cup, the oldest trophy in International Curling.

It is the grandest and likely the most valuable trophy in curling. It rarely leaves the vaults. It was specially commissioned by Lord Strathcona for the first Canadian tour to Scotland in 1900.
As a young man of 18, Donald Smith, (later to become Lord Strathcona) set out from Forres to work for the Hudson Bay Company eventually rising to the top. He made his fortune in trading, banking and investment and was a major investor in the Canadian Pacific Railway. He is famous for hammering in the last golden spike on completion of the transcontinental railway in 1855 at Craigellachie, B.C. He became an MP in the Canadian Government. Latterly he was appointed as the High Commissioner for Canada to Great Britain and entered the House of Lords as Lord Strathcona and Mount Royal.

His handsome trophy is all about bringing together the Scots who developed the game and the Canadians who have made curling one of their national sports.

The competition is unique: it is played nationwide over a number of weeks, with curlers of both countries having the opportunity to represent their country in the spirit and camaraderie that is the essence of the game. 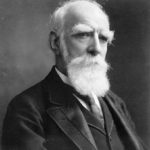 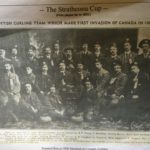 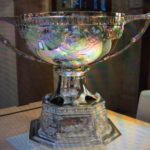 It all started in 1902 when the Royal Caledonian Curling Club accepted a long-standing invitation to send a team of Scottish curlers to Canada to further the special relationship of the international curling fraternity. A team of 25 Scottish curlers were chosen from 200 applicants. Taking their own stones with them, they set out in December 1902 on a 2-month tour from Halifax to Winnipeg, before crossing the border for a mini-tour to the USA, taking in Minneapolis, Chicago, and New York.

Such was the effusive praise from the Canadians of the success of this Tour, the RCCC invited the Canadians to send a team to Scotland and that such a Tour should coincide with the year that Lord Strathcona, with his unique honourable status in both countries, was the RCCC President in 1909. The Canadians sent curlers from every province in the country, even one from Dawson City in the Yukon who started his journey to Scotland on a sled!

The enthusiasm for this event has carried on over the years and is now played for every five years alternating between Scotland and Canada. Every point in every game counts and is recorded, so competition is fierce right to the last stone played by each rink. Pride is very much at stake. Scotland won on the last Tour to Canada in 2013 by 2876 shots to 2621, to even it up at 11 matches all since 1903!

The Canadians will arrive at Murrayfield on January 30 to play their final games over four days against teams selected to represent their Provinces, so these matches may be crucial to the overall result.

Even If you are not one of the 80 Edinburgh area curlers selected to challenge for the Cup this time, please come along to welcome the Canadians and give your support on any of the days from 30th January to 2nd February.

We are closed for summer. Re-opening on 26th September 2022. Dismiss