When you give experienced curlers excellent curling ice, good things tend to happen. Guards appear in front of the house; teams call an aggressive game and try to use the guards; stones are in play and, occasionally, spectacular shots – be they draws, tap-backs, hits, raises, in-wicks, out-wicks, doubles, even trebles are attempted and made.

All of the above was on show at the Edinburgh International Senior Curling Championships at Murrayfield from 16 – 18 November. What was also heartening was the number of spectators who came down to the rink to watch the play during the three days. Carrington CC’s memorabilia sale and auction was in part responsible for this on the Sunday and it was great to see the club rooms so busy when normally there is deathly gloom and silence on the Sunday afternoon!

There were eight ladies’ teams in the competition, so the teams were put into two groups of four and they played a round-robin league from which winners and runners-up progressed to the knock-out semi-finals. Edinburgh’s team Maggie Barry had a splendid league campaign and took the notable scalps of Liz Glennie and Jane McLaren before succumbing to the strong team skipped by Jackie Lockhart. In the other section, a much tighter affair, there were close games and both the qualifiers, Margaret Robertson and Kate Adams each lost a section game, but qualified on four points out of six.

In the semi-finals, the competition said goodbye to teams Barry and Adams, both of whom were well beaten by teams Robertson and Lockhart. The final looked to be an exciting prospect and did not disappoint! Margaret Robertson, with Wendy Henderson throwing last stones, Ann McAulay and Liz Martin, took an early lead and were looking really good for the win; they managed a steal of two in end five to go three shots clear and all looked well in their world. The sixth end was a bit of a train crash for them though and they lost a six to go three down! Informed opinion in the bar talked of “plucky losers” and “they gave a good account of themselves” – the usual stuff. But team Robertson drew on their Border roots and proved themselves bonnie fechters; they hadn’t quite thrown in the towel just yet. A two in end seven and a steal in end eight took the game into an extra end. What a super end of curling it was with Jackie’s last stone to come, Margaret was lying two shots and both guarded. The hit was off, so Jackie elected to draw. Her final shot came up agonisingly short and it was congratulations all round to the Borderers. 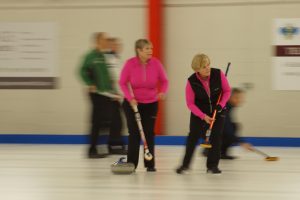 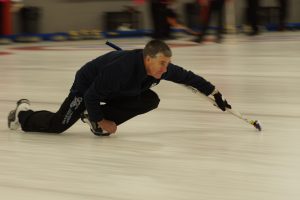 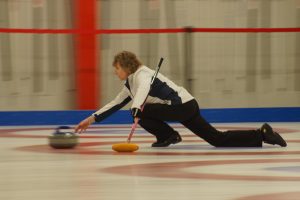 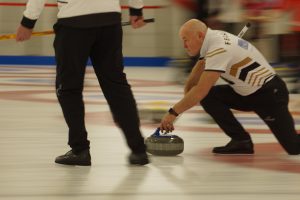 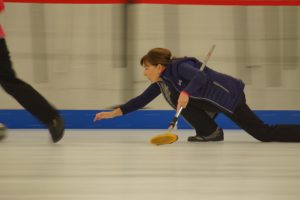 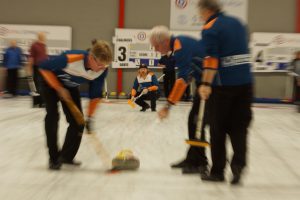 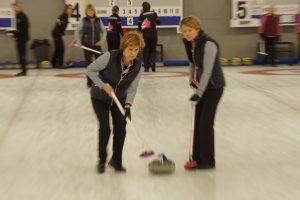 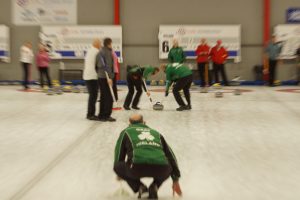 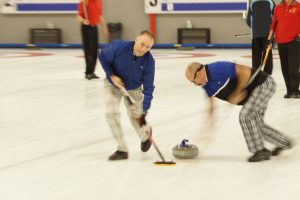 Sixteen teams entered the men’s competition so two groups played out a schenkel league with the top two teams from each section progressing to the knock-out semi-finals on Sunday morning. When the dust settled, some notable teams were on their way home and the semi-finals pitched multiple past champion Keith Prentice against John Duff, and reigning champion Robin Gray against Mike Dick’s local Edinburgh team. Mike found himself 5-2 down after five ends but managed to score two singles, then a massive steal of three in the last end to progress to the final. Keith and his team, Lockhart Steele at third, Mike Ferguson at second and Robert Anderson at lead were peels at 5-5 playing the last end with hammer. John Duff tried everything but a last end score of three made the score line look more comfortable than the actual game itself.

So, to the final. Twice Keith found himself four shots to the good against Mike, who had Ken Horton throwing last stones, Trevor Dodds throwing second stones and calling the game and Ian Keron at lead. Twice Mike came back; indeed, playing the last end proper, Keith found himself drawing against four. His last stone looked good but changed handle. His weight was perfect though and, despite frantic sweeping, his stone managed to hang on for second shot and an extra end. Ken’s first stone in the extra end was a perfect draw to the pot lid round a short guard. Keith had an out-wick which he played well. Ken nominated the same draw as he had played with his first stone; it took an ever-so-slightly wider line and finished perfectly behind the guard but maybe six inches beyond the tee. Keith followed him in to lie shot and game – but what a game it had turned out to be!

In the closing prize-giving ceremony in the club rooms, both the winning teams commented on the ice and made a special point of thanking the ice team under Scott Henderson. Two great competitions and two worthy champion rinks.