10 teams have spent the past two days competing for the 2019/2020 Sellar Trophy, a ladies competition run by Edinburgh Curling Club (ECC).
The event was played as a three-round Schenkel, followed by the High & Low Road Finals. After three rounds, we had three teams tied at the top on 5 Points, with only 1 End between the top two teams. To reiterate how close it was, those top two teams had just played out a draw in the third round, and were about to meet again in the High Road Final, sponsored by SXP Designs. The Low Road Final, sponsored by Laurence Smith & Sons Limited, was competed between the third team tied on 5 points and the only team with 4 points (who held a 5 End advantage over their higher-ranked opponent). And so to the games…
In the High Road Final, Perth’s Ann-Maree Davidson scored a 3 in the first end against Maggie Barry’s local team, who hit back with 2 in the second end, making for a good close opening. But the Perth team pushed ahead scoring a 4 then a 1 to lead 8-2 at halfway. From there the locals tried to claw their way back, and won two of the three remaining ends, but the score finished 9-5 to the visitors. Congratulations to Ann-Maree Davidson, Liz Paul, Margaret Cairns, and Anne Hewitt, who lifted the Sellar Trophy. 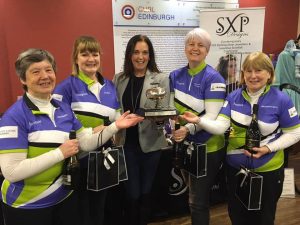 The Low Road Final was contested between two local teams, skipped by Elizabeth Sharp and Christine Hamilton. It was another high scoring half, with Elizabeth Sharp scoring 5 in the first end to eventually lead 8-1 after 4 ends. But if ever there was a case of “it’s not over till it’s over” this was the defining game: Christine Hamilton got back on the scoreboard in the 5th end with a single point, then stole a 2 to be 8-4 down after 6 of the 8 ends. Hamilton successfully stole another 2 to make it 8-6 going into the last end, where everything was to play for. Remarkably, it became a third consecutive steal of 2, to tie the game at 8-8 after the regulation 8 ends. And so to the extra end, with a balcony full of spectators captivated by what may well be the fightback of the season. This is where it was all to be won and lost. And it came down to the last stone. A score of 1. The winners, after 9 remarkable ends, named as Jean Brash, Sheila Arkley, and Christine Smellie, skipped by… Christine Hamilton!
The prizegiving followed, led by ECC Secretary, Margaret Nicol. The Low Road prizes were presented by ECC President, John Hogarth, while Lesley McLaren of SXP Designs presented the High Road prizes. The speeches all wished to thank the organisers, ice crew, catering and bar staff for the wonderful hospitality, as well as the other teams for some great competition.
Next up, we have the Swan Trophy final, starting at 3pm on Thursday 30 January. This is a double-rink knockout competition, this year competed between 6 local clubs, with tomorrow’s final between Oxenfoord and Currie & Balerno. Please do come and watch.
If you’d like to enter a team in any Edinburgh Curling Club competitions next season, please contact the office.

Curl Edinburgh - The next stage

No Replies to "Sellar Trophy results"

We are closed for summer. Re-opening on 26th September 2022. Dismiss